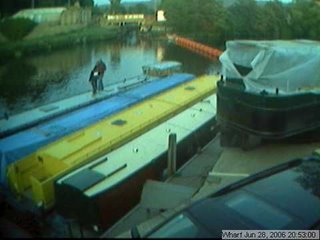 Sitting here as I do watching the boat yard I dread the thought that I might see something after hours and be stuck not being able to do anything. No I don't watch the 'tele' like it was my life line, but I have a big wedge of dosh tied up to that wharf and I want to be sure no vandals FIU. What were these two doing on the roof of boat at 9 o'clock at night 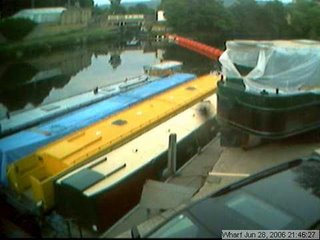 Last night I saw smoke coming from between my boat and the boat standing on the wharf. Now it might have been black exhaust smoke, but at 10pm? What to do? Call Gary? No I don't have his home number. I tried to send a pic to Colin for an opinion but he wasn't on his messenger. I PM'd Windy to ask for her mobile number so I could talk to her and get her to phone the police. 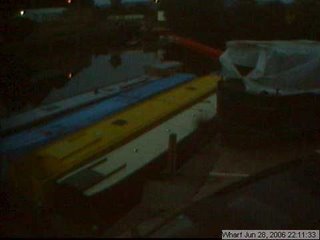 'Police' thats a good idea, google, West Yorks Police gave me a lot of info but none I could use. 0845 doesn't work from here. I ended up texting the police deaf line and left a text and left a message on the answer machine on the police phone in Mirfield. I had a spell with Bones who probably thought I was making a big thing of it, though she did agree with me that there was smoke. What was so bloody annoying was the fact that with all the communication systems we have had the boat been in flames there isn't much I could have done about it. Police websites are great if you are in the UK but not a lot of good outside. I will not be the only person who saw something on a web cam and I wont be the last. I don't mind telling you that I had a panic on for a bit there!

Pictures from Ledgard Security cam
From Maffi at 06:26

Morning. Disturbing to learn that you have univited visitors, to say the least. You may wish to consider having Gary install one of these:

Or, the cheaper option:

The latter of course would only work if the little sh***s can read.

Ah, well, no, we didn't as it happens as far as I know. but the exhaust comming from the back of the boat on the wharf, which is what I think it was, just looked like smoke.

Did you see the pics would you have been worried?

Hi there. I saw the pics and your text when I checked on Google Reader this morning for updates. Yes, I too would have been worried, so much so that I would have been on my way over there to see what was going on! This of course is v.difficult for you in the circumstances. I would get Gary's mobile number, just in case there is a 'next time'. I propose that it is in his interests to know aout such things, just as much as it is yours. Cheers, Chris.

looks like the boat is still there this morning! PHEW! Any news from the Yard about the smoke and folk?

Yup still there. More smoke this am it was coming from that boat on the wharf.

Did you really win the can?

apparently so - I had an email telling me.