A trim of the thatch

So there I was on my way to the barbers, that’s what we older peeps call a hairdresser. I felt the need for a mowing if only because long hair takes so long to dry in this cold weather. It wasn’t particularly cold when I arrived at the barbers yet the man with the scissors wore a reefer jacket and a scarf. I think he was trying to look cool. He didn’t look cool at all. He looked to me like the sort of man that would use the word ’business' often, like they do in East Enders. As I walked in he looked at me and said, “You’re next.”

I took a seat. I watched as he took eons cutting the hair of a youth in his twenties who was already seated and being done when I arrived. The end result could have been achieved with electric trimmers in about 30 seconds. However he could not have charged £13 if he had done it that quick. Why does the shortest of short haircuts take so long? The lad had ‘products’ applied before he stood up.

What is it with ‘products’, “Would you like some products on it sir?” Well maybe I would, how about some 15/20 engine oil or yellow paint maybe some grated architrave. (Those of you that do not see the irony of this should be reading Janet and John books). What a silly thing to ask! Tell me what you have got. Ask me if I want conditioner or hair gel or whatever. Do not leave it to my clairvoyant skills to work out because I don’t have any.

Another reason for having a haircut was some people’s idea that I had long hair to effect a comb over, which is certainly not true in my case. Me being blessed with a very full head of hair, I could have given Jedward a run for their money. Though even in the RAF I was often called 'Wiggy'.

Anyway just before I fell into a coma my turn came. I got up from my vantage point and sat in the chair. Now at this point I like to nod off, but the chap insisted on asking how I wanted it. Isn’t it obvious? I have had it like this for ages. It grew this way because this is the way it was the last time I had it cut, it just happens to be longer. And besides it doesn’t matter what I say it will always come out too short.

We decided on a not too short, short back and sides and he set to with the weed whacker making his way through the undergrowth to give him a starting place for the creating to begin. It was like a slash and burn exercise in the Brazilian jungle. Snip snip snip cut cut snip cut snip snip cut. Then all of a sudden, without any warning, it was done. I had twenty times more hair than the lad in front of me yet it took less time to cut. He picked up a mirror and showed me the back of my head. He asked me if I wanted any ‘products’. There was no evidence of any ‘products’ on display that I could see from which I could make an informed choice so I said, “No.” With that a young girl who had been perched on a broom at the back of the shop guarding the door marked “Private,” took that as her cue and flew across the room to sweep away the debris of which there was lots.

There was an area of hair at the back of my head set off to one side that seemed to want fly on its own. I pointed to this and said it wasn’t right. He said, “You have some sort of squirling going on at the back there and I can’t do anything with it because you don’t want any products.” I assumed he thought he maybe might stick it down with some ‘product’ he bought from B&Q.

I refrained from telling him that I was born with a double crown and that as a qualified hairdresser he really should be able to recognise that. He was the first person ever to have left that bit sticking up. In actual fact I walked in with a woolly hat on and that was part of the reason for the fly away hair, he should have seen that because he spoke directly to me when I walked in and I had the hat on then. “Well,” I said, “It can’t stay like that.” He let out a low level hurrumpfff and cut it some more then decided that the rest of the head had to be trimmed to match. In the end he didn’t do a bad job but as predicted it was now too short. Had I not said anything he would have had me walk out with a very poor haircut with which to demonstrate his skills.

He parted me from 13 of my quids and didn’t even ask if I wanted anything for the weekend. You know, I never did understand what they meant by that, but I missed it, it was part of the ritual. I felt cheated. I did once asked for a pie and a pint and was shown the door, which was not a problem because I was finished there anyway.
All in all not too bad, it will do, but young people shouldn’t be allowed to cut older heads, we are different to their younger clients and expect a service that doesn’t require ‘products’. 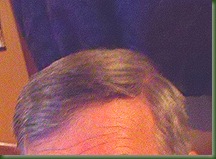 There were four things missing in the barber shop

Thanks for that amusing account Maffi, that made me laugh out loud.
I also detest going to the hairdressers and have paid from £10 (special rate for pensioners) up to £45 with little difference in the quality of the cut either. Goodness knows how much more 'products' would add to the bill!
Nice haircut you have there, suits you sir!

Do you really not know what "something for the weekend" is?

Nice trim, by the way!

I say bring back the good old days when you sat in the chair asked for a Tony Curtis or a D/A, and you all came out looking the same as the next guy with a short back and side lol and it only cost you a shilling. I go mid-week here in Kent pensioner that i am for £7 with product, ear hair Singeing and eye brow trimming.

Quite a few years ago it became apparent that I was developing a monk's haircut without any paid assistance, so one Saturday I locked the bathroom door, got out the scissors, the shaving foam and wet razor, now I am just another chrome dome, only costs "supplies' aka products to maintain, and nary a barber/hairdresser have I bothered with since!