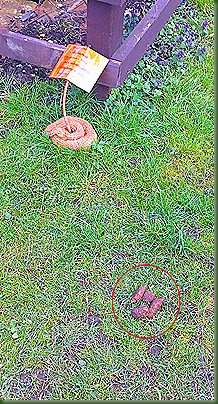 The reason this happens is because people walk well in front of their dogs and never know what is happening behind them.

Only the other day I saw a dog have a dump and the chap was only a few feet in front. When I asked if he was going to pick it up he immediately turned on me and and said, “There is no need to take that attitude”.

“Yes there is! You people come around here and treat this place like a toilet. Don’t lecture me about my attitude to your law breaking. If you didn’t break the law I would not even have had cause to speak to you.” 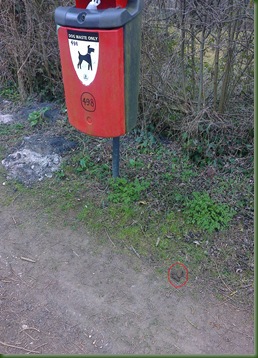 As for the second picture, the law is quite straight forward. It is the responsibility of the owner to remove all doggie doo doo from public places or places where the public has access to. (This includes footpaths out in the country). Not having a bag is not an excuse, not seeing is not an excuse. Now how much clearer can it be? I don’t think leaving it near a bin is quite the same as putting it in the bin!

Leaving doggie doo doo in a farmers field can leave you in a bigger mess (sic) because the micro organisms therein can cause ewes to abort their lambs. The farmer has recourse to the law but how does he find  who’s dog did the deed?

I pick up after Molly because I have too. I don’t particularly like doing it and I certainly don’t see why I should pick up after other peoples dogs. Thrupp is a lovey place spoiled by inconsiderate dog owners.

One Thing After Another said...

Agreed on that. We had to leave our long term towpath mooring (CRT) just because we were fed up with people coming past and letting their dogs shite outside the boat. They'd even look in through the windows at me and smile while they let their dogs piss up my plantpots I had out! Just can't believe it!

A big sign saying FUCK OFF to DOG SHIT has a good effect.