Today nbEllie May arrived at the bridge. He asked if those were the moorings. I said, “No Sir!” asked and answered. “You will find moorings round in Shipton.” He moaned. His wife came and asked why they couldn’t moor in the turning point. I pointed out that any hire boat coming through the bridge could do them some serious damage and of course the rest of the space was a BW private mooring.

I crossed the bridge to advise Mr Grumpy Guts of the situation here a Thrupp. His wife said, “This man says… To which he said, “Who is he? What is his job?  I explained as politely as I could that I was a local boater and that I would help him to understand what was what here in Thrupp. I knew he wasn’t going to listen he was very aggressive and demeaning. I explained the situation to him. “I know the rules,” he said. “I’ve been boating for years.” “I had dinner with a CRT director.” Well I nearly lost it at this point. I wanted to throw him in the water, but I said “It doesn’t matter who you had dinner with, you cant moor in a winding hole.”

A right F***ing asshole. What is most annoying is that he passed at least three moorings outside the Jolly Boatman. The little shit was spoiling for a fight. When he left the water point he shouted threats at me, but only after he was in the middle of the wide 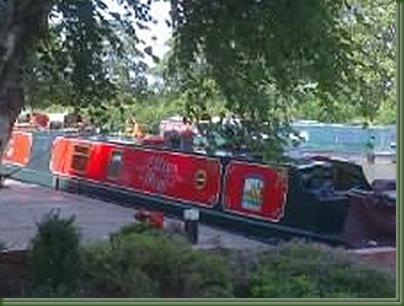 Other people who I have talked to said he was known as a total wanker.

You will find an article about Ellie May and its owners in the September Waterways World.

Oh yes, I met up with the lovely couple at Duke's Lock where near the entry to the Tames is. It sounds like it was not long after you had the pleasure of meeting them.

First the guy leaves his windlass on the spindle and when I told him it was dangerous to do so, he boasted to me that he had been 'boating for 30 years'

Then he started bending my ear with fascist politics and how he had the ear of CRT and that soon CCrs would be a thing of the past. It was all very tiresome. Later, a group of young chaps on a hire boat came along, and he started abusing them! I will remember to avoid them if I ever come across them next time! Nasty man.

Is this the same couple?

I don't know if they observed the length of time they could moor for?

Yes Skippy it is they. Yes they did overstay.

You are nutters to think that Pat and Norman are not nice. They are VERY nice. As for you're post, to hell with you. What people call him is bullshit.

Norman is not a very nice person. I say this not from hearsay but from how he treated me when I tried to help him.

He is a very hateful man. I trust you will tell him this.

The canal system will be better without him

Maffi, I am a 13 year old and you have verbally abused me. Get wrecked.

AND I live on a boat too. Salaud. By the way, that is French.

Its like this 13 year old, this is a grown up world. Come here at your leisure but if you come as anonymous I will assume you are a grown up.

I put you right about the content of my post. I asked who you were (agreed not politely but not abusively) and I corrected your grammar. You DO NOT come to my page lecturing me about how I run things. If you want to run a blog then may I suggest you get your own.

It would seem the apple doesn't fall far from the tree. Good night!

I go to school! My parents can cruise while I am at school (the location of which I am NOT going to reveal) and when I go back for holidays and leave-weekends, I can cruise with them. I am NOT going to reveal where we are moored. Oh and DO NOT call me '13 year old'; I have a name which I will never reveal to some nasty, mean-spirited little person who insults my friends. GET LOST!

Yes Maffi, I do live on a boat!

P.S
Are YOU a continuous cruiser? We have a private mooring in Newbury, thank you very much. And my name is Jake.

I don't really see why people are mean about these two. I met them last summer and they were very nice and kind to us. We live on a boat too. The trick is to be calm and collected, not lose your temper!!

But I don't like seeing abusive language towards a 13 year old or seeing cover up tracks created by the author of this page. Swearing at a child is unacceptable.

Its like this Jake, Norman is an arse. He is a liar. He is a hypocrite. He is rude. He is a braggart! And he wrongly believes he is taller than a fart!

He has told many lies about me, (and there are witnesses). He complains about people over staying on visitor moorings yet he does this him self (there are witnesses). When I was trying to help him find a mooring he ignored me and asked Mrs Bate if I was important, if I was worth talking to? (there are witnesses). He tells people things that he cannot possibly know and brags about his connections at CRT. And when he left Thrupp he threatened to "get me" (he said this when he was suitably out of reach or he would have had a swimming lesson). He manically attacks any one who does not have a home mooring (there are many)[read some of the comments here]. All of these are things you cannot refute because you were not there to see. You can chose what friends you want that is your prerogative, but don't you dare come here into my space and tell me what a nice man he is because on personal experience he is a lowlife and that is being generous.

As for the "13 year old child' every one who comes here is treated as an adult. After you informed me you were 13 my language was moderated. I called you '13 year old child' because you did not have the manners to leave your name which is why none of you comments have since been posted. Your parents are not CCers so Norman will treat you OK. If any one tells Norman they are a CCer he becomes a violent psychopath!

He may be your friend, but to CCers he is Satan's spawn. It does not look good when you are telling adults how they should relate to nasty people and this is another example of your bad manners. Now then this post is really old and I don't usually respond to comments that old. Be a good little boy and stop bothering me until you find some manners.

I see you are at St Ed's I am moored down opposite College Crusiers pop down say hello!