THIS COULD KILL SOMEONE!

Sometimes as I walk the canal I have to wonder why some people were not asphyxiated before they had a chance to reach even toddlerhood. Soylent Green needs to be applied in certain sections of our community.

At ten o’clock Monday morning Dan nearly lost his head and several others nearly came a cropper at the behest of this arse because we don't have compulsory euthanasia for the terminally stupid in the boating world. The benefits for this would far out strip the disadvantages. Carousel should be compulsory for those who simply defy the theory of DARWIN and refuse to die. 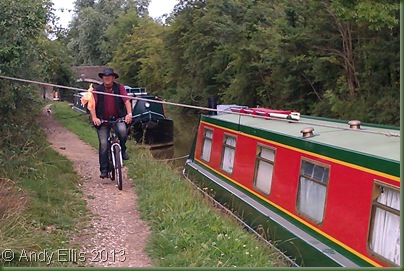 Had I not seen this It would have taken me off the bike, put me on my back. Had I survived it would almost certainly have damaged my throat or even broken my neck This is not the kind of life threatening thing a man of 62 needs at his time of life.  This most certainly could have killed me or indeed anyone who was cycling along that path.

I don’t care why he did it. There is never going to be a good excuse for doing this. One more reason why  boat handling should be a licenced skill. This arse is not safe to be let lose with crayons let alone a 16 ton narrowboat..

Just so you know who not to moor near, here is a pic. 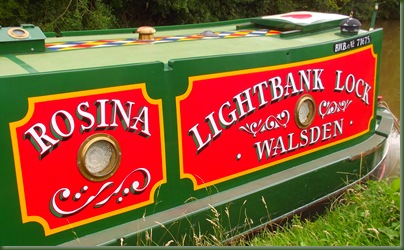 Well done you for posting this! did you get a chance to speak to the owner?
Rob and Suzie

One way to remove the problem and stop it happening again would have been to cut the rope. I suppose he/she thought by adding the orange bag all would be ok.

I Hope you cut the offending rope
So Stupid
Nb Sokai

Who was it who said "unfortunately, common sense is not so common"

Hope you had your knife with you & cut it !!