After what seemed like a long time of little activity, things are moving. The port side panels are laid out ready for the next stage which I assume is welding. Various things have been happening, people at the far end of the workshop are cutting/marking etc. And the fork lift has been rushed off it's little wheels which, I might add, spent too much time on the baseplate.

Today's new visits are from:-

Finally a bit of welding. My bottom is now one piece.

To add to the already long list of countries that paid the build site a visit we have:-
Kuwait/ Bellevue Newfoundland/ Pak Sha Tsuen HK

Not much happened today that I could see, but it could have been happening off screen.

I am slowly getting together the stuff I want to send home, just a few more bit to get and I can 'Cargo' it all to Gary. I am sure I can go down 'light' street for my reading lights and bathroom light.

Some stuff I want is best bought in the UK so orders will be placed for Washer/dryer and chairs.

I really want a full set of Geo maps but ordering on-line from the UK has cost me about £100 with nothing to show for my dosh. Having ordered books to be delivered directly here and to my home in the UK nothing turned up.

Now I can understand post going astray here in Saudi, the postal system is crap, but not in the UK, but such was my faith in't net that I didn't pay attention to who I ordered from. Even though I had bank statements to say the money had been paid, the name on the statement bore no relationship to any of the advertisers in the canal mags I brought back with me. I am sure that someone in the Canal book world has an order that was not filled, but which one?

I did email a few possibles but no joy. Ho hum!

More visitors to the build site: Warburton Warrington and Bristol City.
From Maffi at 19:35

The bottom plates are in their build position and late this afternoon a 'fabricator' was grinding the first join edges. I think it will get better from here, well I hope it does.

The engine appeared in the screen today.

Now the webcam is up and running and progress, how ever slow, can be seen. The offending boat has been moved and from now on there should be a lot of activity to see.

The only continent not listed so far is South America, but I am sure I saw one visitor from Brazil earlier on.
From Maffi at 17:51

Well the good news is that the webcam is working at the build site. The bad news is that not much is happening. Later in the week we should see a lot more activity.

Try as I might I am still no further forward in my quest for a name.
This is the short list so far in alphabetical order. 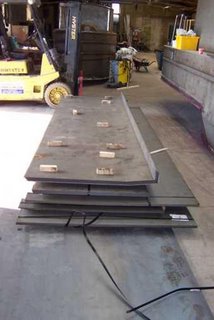 With the steel delivered something is happening. The two bottom plates are welded together EDIT: error no they're not. The rest of the boat is in 'flat pack' on top of it.

Problem seem to be that, because it was late arriving, the previous boat is further along than it would otherwise have been. Now the situation is that the back of my boat cannot be built until the other boat has been moved out, the back of my boat being part way across the door. I am assured that May 29 is still the expected finish date.
This is noted on the contract. I have told Gary that I will turn up irregardless of state of finish, with my sleeping bag, and they will have to work around me. Well I am homeless where else can I live 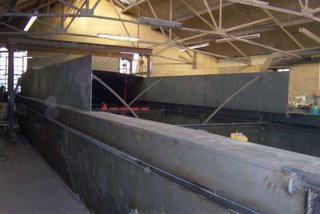 This is the problem

I now have the elusive Contract in my sticky little porkies.

This will be signed tomorrow after work and sent FedEx post haste.

What's in a name?

However after living in Riyadh for nearly three years I am not sure I want to have such a prominent reminder of my time here. Yes it has been fun at times but most of the time it's been frustrating (but that's a whole different blog).

I could call it just Maffi, most people that know me on the system know me as Maffi. Maffi means no and I thought that was a bit negative. Yes is more positive and in arabic is 'Aywa'.

I had toyed with Fi Mish Mish, 'not this year' due to the fact that my boat seemed a long way off.

What in my life would I be able to live with, what would be a name that would mean something to me and to others. Sgt Pepper (I'm a great Beatles fan) hmmmmmmm. But there again Sgt Pepper already exists in Narrow Boat form, think again.

I have for many years been a fan of the late John Denver. I could live with that. John was a great supporter of the environment, was involved in a Presidential commission on world hunger. Was one of the first to use his celebrity to bring world hunger to the public forum, long before Live Aid. John started the Windstar foundation in the USA, a sort of international college of the environment. Running Windstar cost him personally $2 million a year, just as well at one time he was the highest paid performer in America.

His talents as a singer and song writer is how most people will know him. He had a tonal quality to his voice that could bring tears to the eyes of angels. That a simple 'Country Boy' could have such a great range is a testament to his commitment to give his public the best he could.

Boats by their very nature are feminine. Would a mans name really be appropriate? I dislike names which are an amalgamation of Mr & Mrs boat owner. These seem to me any way to display a lack of real thought.

I had thought of ABWAN A Boat Without A Name, I offered it to someone else but it was declined, that could be a forerunner.

I still haven't come up with a suitable name, but I have a few weeks yet before it is necessary.
From Maffi at 11:56 4 comments:

What makes a boater? Pt 2

After feeling well and truly slapped by some waterways type journalist about not owning a boat, so not being competent to write about boating, I got on with my efforts to become a boater. Tweaking the design, trying to think of a name (see above) downloading more and more stuff from the net, reading.

It is said that you are never going to be a boater until you have read LTC Rolt's book Narrow Boat, which I did in the middle of last year. Didn't make me feel much like a boater even though it is a superbly written account of boating. It did however strengthen my resolve to be a boater.

This month I decided to read it again. After the first reading I made up my mind that at some time in the future I would follow the journey taken by Mr & Mrs Rolt in 'Cressy' so I would need to re-read it to make notes and plans etc.

This time I read it from cover to cover. Little did I know just how informative the early pages would be. The forward is by Charles Hadfield. Charles was a great writer on canals and their history. Robert Aickman, Frank Eyre, Tom Rolt and Charles were the founder members of the Inland Waterways Association. Robert, Frank, Tom and Charles were already putting out books about canals and their history when they formed the IWA in 1947, yet none of them except Tom Rolt had ever tillered a Narrow Boat.

Once again I am cut to the quick. I am not 'allowed' to write about Narrow Boats because I don't own one, yet three of the more influential people in modern day narrow boating were, at the conception of the IWA, less experienced as narrow boaters than I.

I cannot understand the snobbery that goes on in the boating world in general, but this really makes my blood boil. I feel hard done by. Not because I can't get a web rag to publish any comments I might want to make, but because the reasons given by said web rag are most certainly not in the spirit of the pioneers of modern day narrow boating.

If you have enjoyed what you read here let me know It would be nice to receive some feed back. It might be a while before I get a book published, but published I will be. Thank You.

Edit:Feb 17 Oh fer chris sake! Now I am being told I am because I am not a boat owner I shouldn't make comments, by a non boat owner
no less who posts more than anyone else, I give up!
From Maffi at 23:15 4 comments:

And so, it begins 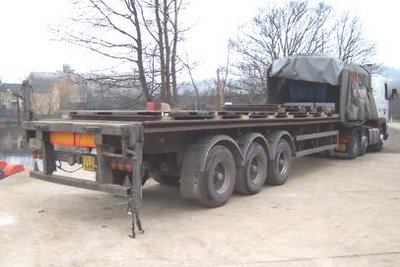 If you had a few tons of sheet steel to take off a lorry, how would you go about it. 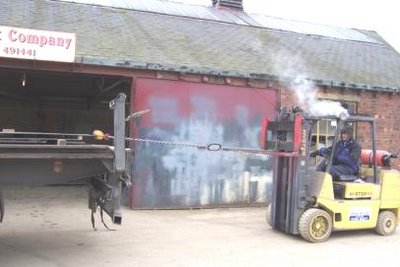 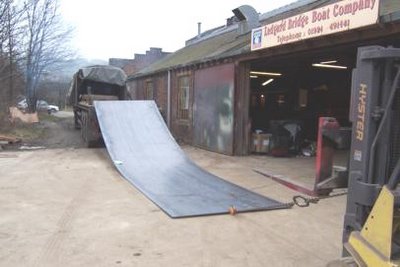 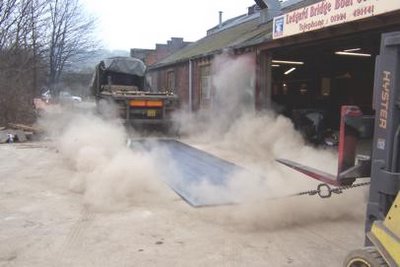 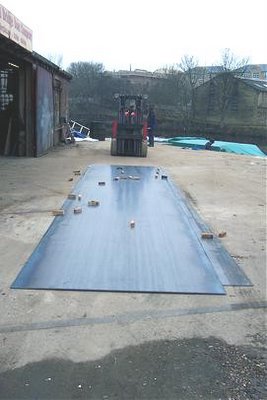 Doddle!
Not keen on the added extras though.
From Maffi at 22:48