I came up to Chertsey to top up with water. Unfortunately there is still work going on at the lock and the water point is not accessible. So up to Penton Hook lock. Would you believe it the water point is roughly half way along the lock chamber and about 40 feet back from it. The lockie said it was for containers only. Well not a lot of good for us steel box boaters.

I was going to spend a couple of days in the marina (Wed/Thu) so I gave them a call and went in early. I very slowly manoeuvred around all the Tupperware, a side current from a weir took me by surprise and I nearly trashed a plastic pig. I reversed on to my mooring which as it happened was only 3 away from Bones.

Walking over to the office to sign in, the snow started and didn't stop until I got into the office looking like the abominable snowman. If you are in the vicinity it is I think value for money. I booked in for three nights, £30 + £15 for utilities. Which was good, I don't need to run the engine for a while.

I was able to order a new drive belt for my 100A alternator, which for some reason had stretched quite a lot beyond adjustment. The belt arrived on Thursday morning.

I talked Bones through installing a car radio and as luck would have it worked! She was quite impressed when I turned two single core cables into a twisted pair with her hand drill. Bones cooked dinner for me and James on Wednesday.

I asked Bones if she wanted sex. She said no, but I gave her some anyway. Muller's Honey and Walnut yoghurt is sex in a pot and she had to agree it was. No, no, no you don't understand real sex wasn't on the menu. She is far too old for me. Bones is a very funny person and I know she will hate me for saying so, but her brain works like it's on another planet.

Thursday we invited Dick from the next boat to join us for dinner and we murdered a couple of bottles of vino and a few cans of Fosters.

I am off, tomorrow, to Laleham then to Shepperton Saturday afternoon. There is a 'boaters banter' at the Thames Court pub on Sunday. I shall be leaving for Oxford on Monday. 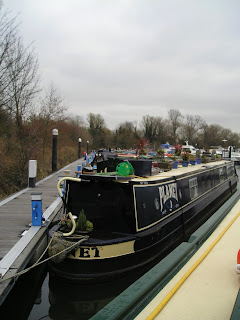 This is a good reason to be a continuous cruiser
From Maffi at 00:58