Up with the larks, well the lazy ones anyway, and away. The canal to Brentford is nice in places, not so nice in others. Passing the Paddington arm I saw a boat having problems with a fouled prop, difficult enough with a weed hatch, but more so without one. They caught me up at the top of Hanwell. It was a community boat on a training run to Brentford. Lucky me, "Sit back and enjoy the ride", they said. So I did.

One of the locks before Brentford had obviously not been opened for some time a collection of plastic bottles, logs, sweet wrappers and other assorted rubbish. I counted 37 tennis balls.

Coming into Brentford it is awkward. Should you go left or right into the Marina? Left looks like the right thing to do, but that only goes to a weir on the river Brent. The marina is actually the canal down to the lock. I moored up in totally the wrong place. I was greeted by a forum member.

Well despite mooring in the wrong place I did enjoy a decent connection, but it was not to last. I moved back up past the BW office where the signal was non existent.

The Gauging locks at Brentford are very interesting. To calculate the load carrying capacity of a boat it was necessary to load the boat until the top of the gunnels were only a few millimetres above the water. This was a very dangerous thing to do. On numerous occasions a small ripple on the water would cause the boats to sink and with them the loss of the homes of the boater and his family along with all their possessions. This at a time when there was no social services support system.

I collected a list of maintenance being carried out on the Thames from the BW office. They were very helpful but did not respond to my "milk and two" request. Ho hum!

I cleaned the boat up on the outside. Got rid of the wood I had been storing on the roof. All in all Milly M looks quite good. Brentford has a good model shop so I was able to get a few tins of Humbrol to touch up some of the smaller chips in the paintwork. In the early days placing the windlass on the roof by the hatch caused tiny chips in the surface. It didn't take me long to buy a few Dri Deck panels to place beside the rear hatch which has reduced this problem. I could of course have bought some rubber car mats to the same effect. I really need to improve my lateral thinking skills. Parts of the name are peeling and beginning to look tatty, but a few minutes with a paint brush tidied it up nicely.

Mother is not so well. It would appear that her water pills are causing her kidneys behave erratically, but at least the problem was highlighted and now has now been corrected.

The chap two boats down from me nb Beetleguse set fire to his bed today, Doh! Not his year really, he broke his leg just before Crimbo and is still limping around. One of the reasons I was able to dispose of my store of wood so easily.

Allan thought the boat and the area she was moored in was good. Anything to do with boats and water and Allan is sold.

Lunch at The Fox and dinner at Prezzo

I went to visit Mother.

I didn't stay with my mother very long, mainly because I don't like leaving the boat especially given the strong wind warning. Since mum has altered her medication her kidney function has improved. She seems happier in herself now, but how much longer she will be able to look after herself I don't know.

I have had the pleasure of travelling on the London Underground this week. What a fiasco. It is assumed you know what to do, where to go. It is not as easy as one would first think. I am an old hand at the Underground. I used to travel on it every day to work in the city, but many, many years ago. It is not so easy these days.

Years ago the bus fare from mums house to the town centre was 4d today it was £2. That is some inflation. If I had had an Oyster card the journey would have only cost me £1. It seems that the system as it is, is a rip off of the tourists that come to the city.

Meanwhile back at the boat……….

Is it that time already? Tempus fugit!

I spoke with the Thames river people today and was advised not to go on the Thames for the time being. So I am stuck here. I may just go the long way round down the Oxford.

BW assure me that the unplanned stoppage on the K&A near Devizes will be complete by April. Which end of April I am not sure but that is better than the six months I had heard around and about on the cut..

I painted two flashes on the bow today. First coat a bit patchy second coat nice. Then the rain poured down. Funny thing though the right panel no problem, the left panel went all rough. 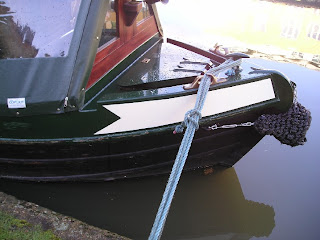 I have been busy with the brass work today, It takes an age doing all that polishing after leaving it for a while. Of course now the tunnel light and horn are looking all shiney and new they are more likely to go missing.