Question. What do McKinley Morganfield and canals have in common?

McKinley Morganfield is better known as Muddy Waters. Post WW2 Chicago Blues guitarist.
Muddy Waters is also a new series of children's books about the canals and canal boats. Muddy Waters being the main character/title. The books, written by Kidlington man Dan Clacher, are the the culmination of many years of high quality story telling about canals and canal boats to his children and grandchildren. They tell tales of the adventures of several narrowboats with names like POPPY, DUDLEY, HAMISH, OLD BADGER, PENNY LANE, OWEN, JOLLYBOATMAN taking cargo to and fro on the canal and occasionally the river.

Dan says:-“We are all canals and boats mad in this family and I have been writing and telling the Muddy Waters stories for internal consumption only for years. Only recently have we thought about publishing . . .”

The stories centre on Thrupp and its environs but do move farther afield. Thrupp, Wolvercote, Dukes Cut, Kings Lock feature in the first book. 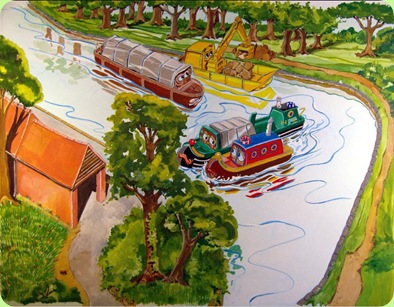 The first book is on sale at various paces locally, Annie’s Tea Rooms and the Boat Inn both at Thrupp. The second book is now published. Three other are complete waiting to go to the publisher and 5 more are in the planning stage for the first series. There are other books on the way. 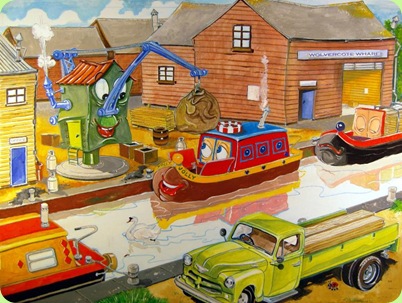 The stories are engaging and the graphics by Stephen Preedy are superb. I suspect children will love these books for years to come. Rosie and Jim look out you have some serious competition.
There is a website but it is not finished yet.
From Maffi at 19:56

Love it! I thought that corner in the first picture looked strangely familiar! I passed you this morning Maffi, hopefully see you again soon!

I really must buy a copy!

Are these books nationally available, or just in the Oxford area? They look very good.

They will be available nationwide. I think they may be on AMAZON not sure. However if you want some I can pass you on to the writer.

You are correct in your assumptions they are very good. If a leading figure in Telly Tubbies promotion says they are fantastic you can bank on it being a sucess.

I was always amazed that the best that we could come up with for the waterways was Rosie and Jim. It was - and is - crying out for better treatment. Looks like this new series is a winner.

Guess that WW and the other mags could do with a book review!

But then I always wanted a waterways version of Railroad Tycoon. Because I am sad.

The website is now up and running and the 2nd story is now also out- can buy online.
www.muddywaters.org.uk