The Anglo Welsh boat PALLADIUM was moored outside the Jolly Boatman on Saturday night. PALLADIUM had earlier given an amazing demonstration of how not to drive a boat following a very high revving turnabout at Aubrey’s Lift Bridge and an audio exercise in paint scraping down the side of SANITY AGAIN (Bruce and Sheila were not happy). 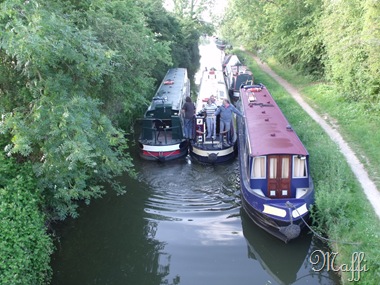 On Sunday morning Chris from Wren’s Nest came down the canal heading for Dukes Cut. We thought this was strange given that the plan was to reverse up to the lift bridge and turn to head north. “There is someone moored on each side of the  canal at the bridge and I can’t get through'”, he said. “I’ll get through”, says Bones, “you just have to push him out of the way”. JUNIE MOON was on a fourteen day spot and PALLADIUM it would seem had moored opposite. On closed inspection PALLADIUM’s ropes had been untied and he had just drifted through the bridge hole. One of JM’s pins had been pulled and ROWAN’s rear pin had been taken out of the ground. Bones skilfully aided Chris to manoeuvre back along the canal and squeeze through the narrow gap. 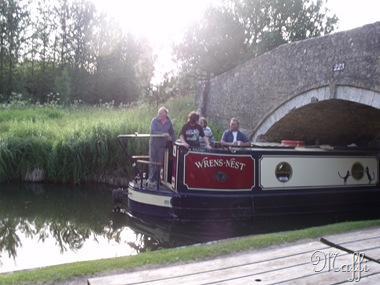 And pop out of the other side of the bridge like a cork.