At long last things seem to be moving on the bridge front. The control boxes have been installed . The access to the operating panel is now in the wrong place and the route to be taken now involves stepping over a  small wall. According to British Waterways it has taken a long time to get the bridge sorted because they are making sure they get what they want (hence all the rework).

Well all I can say is if this is what British Waterways wanted they have no right being in charge of a bubble gum machine let alone our waterways! 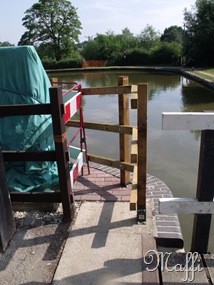 There is a second panel on the other side of the bridge, it can just be seen in the top left hand corner of the fence in the picture below. I didn't see the point of  a close up as one ridiculously large box wrapped in a tarp looks much like another.

I cannot believe that British  Waterways were able to do this to a listed structure without the Planning Department getting involved.

This box is supposed to have a low impact on the environs of the bridge. It is a travesty! No a tragedy!!! 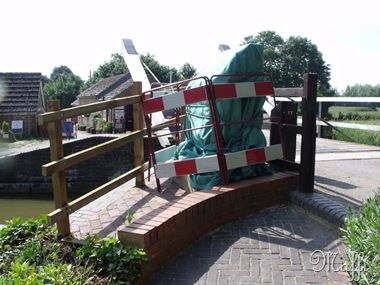