This group of Oxford grads from Norway decided to celebrate the end of exams by taking a boat out. They were all dressed pseudo sailor (haven’t seen that before well not in the last hour anyway) for the event. A couple of them came and chatted and asked sensible questions like “What is a good thing to do so we don’t upset the locals?” “Well no sp***ing is a good thing” “We didn’t do that, it has taken 7 hours to get here” Well you cant argue with that its about 4 hours normally.

I took photographs  on their cameras and this one on mine. All in all they seemed a very nice bunch of guys. 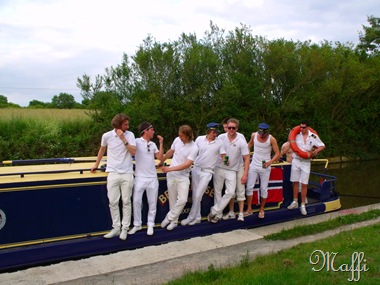 Then the beer kicked in about 10 ish. There have been reports of drunken  yobs dancing naked in the pub garden at the ‘Highway Man’. Just about every village resident was later awoken by drunken yobs, young children woke up crying. It was suggested that they should go away and sleep it off. Well that only meant they moved back to their boat, where on the way they were banging on boats, rocking them on the gunnels and being very noisy dancing naked on the towpath! In general being very disrespectful to their host country. The mêlée (?) continued well into the night.

The waterway system needs hire boaters. Hire boaters such as these need to let off steam but they should also know where to draw the line!

Many resident sent emails of complaint to the hire Company and all received this ‘well crafted’ reply from College Cruisers:-

The reply went on to say

So no personal touch then? Am I surprised? Not one bit!

You omitted the bit where I opened my curtains to see what was going on and found my window full of naked men! I am still in therapy.

I can't help but think it will have made the event even more amusing to College Cruisers and the lads involved that they upset the whole of the village and so many people with their antics.

I now have some sympathy for the people who complain about the larger lout football hooligan british behaviour abroad. If going on a narrowboat is that exciting to Norweigans I suspect it isn't a patch on the behaviour of the English - we all know how inspiring football is.

I was there - hiding in the bushes. The guys were hot! Much hotter than the locals, geeeeeeeees! Dripping in my pants...