The car park at the Jolly Boatman was continually being used by bridge hopping boaters and walkers. Both groups it seemed would never venture in to buy a beer. The owners have now been forced to take action because the car park often appeared full some customers would drive past and go else where.

A pay and display machine has appeared. It costs £1 to park for three hours, however if you go into the pub with the tear off portion of the parking ticket that £1 is taken off the bill. Personally I think it should be £3 which is about the price of a pint here in the south. 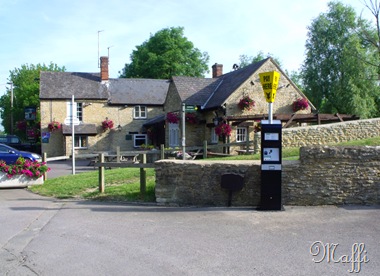 It still doesn’t stop non-customers parking there, and as long as they don’t over stay the three hours they will avoid the ‘Denver Boot’ but what about someone who sits at the bar all night, his ticket is still only valid for three hours. Does he get a ‘Denver Boot’? Will he be allowed to get a Taxi home because he is too drunk to drive himself. That yellow bit in the middle what does it say?

On the other hand, a full car park could indicate that the pub is so good that everyone goes there.

It coud John but there was still nowhere to park

In the case of the person sitting in the bar all night. They would be given a day pass for the car park to allow them to get a taxi home and collect their car at any point the following day!

Thank you for that.