The bridge broke down again yesterday. I called BW at 11.15. The engineers that came to sort it got the call at 13.30 at which time they were on the M5 near Bath (so much for the 2 hour call out time). They arrived about 3 ish.

Now the problem is two fold.

1. People still keep raising the bridge on the chain. If the bridge is broke you have to do that but if the bridge ain’t broke then pulling on the chain will break it oops! sorry, ‘cause it to fail’.

2. there is nothing to tell them not to. Add to that when people arrive at the bridge for the first time there is no sign to say it is electric, I believe BW is addressing that. Tying the chain up seems to work.

However the control panel (CP) is bleedin’ Huge so really on that point there is no excuse. Yesterday evening not long after the engineers had left a guy was starting to raise the bridge with the chain, I asked him to stop because the bridge was now electric. He said “Well it didn’t work yesterday. I cant argue with that, but he should have checked. The CP tells you when the bridge is not working.

Like it or not the automatic bridge is here to stay. We will get used to it and in years to come some will tell their grandchildren of the time when the bridge had to be raised by hand and they wont believe them or maybe kids will learn about the time it was hydraulic, who knows?

The abutments at Aynho lift bridge have recently been rebuilt. This was required because repeated dropping of the bridge by inconsiderate boaters caused the brickwork to fail. The cost £200,000. All I can say is if spending nearly £30,000 at Aubrey’s can save £200,000 then it was worth it.

PS the engineers that came yesterday didn’t have a key, would you believe it? So they borrowed mine. 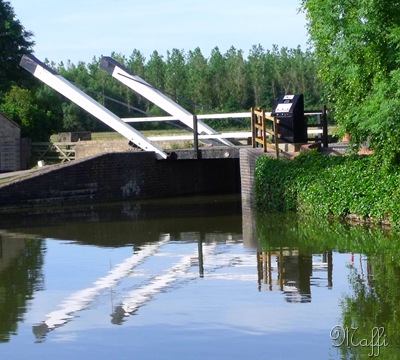 There will no longer be pretty pictures of “AUBREY’S”. You can see from this picture that the control panel is very noticeable (I am miffed that I didn’t get a picture like this before the CP arrived). This is just one of the panels, a second one resides just out of the picture to the left. They are supposed to have ‘low visual impact’. The colour options were Black, Green, Grey, Stainless. Black may not have been the best choice. Maybe polished Stainless steel would have been better, at least it would have reflected the surrounding greenery. BW wanted Black, Why?

I was told by BW this morning that it keeps breaking because people are pressing the 'panic' button, and if it is pressed more than 3 times the system panics and locks everyone out....

Mmmmm are you sure you are not "PLAYING" with it? just to see how many time you can get the BW engineers out before they say screw it?

The emergency stop function is a software problem they can take it out, simple!

I don't think the lift bridge (just north of Aynho) was closeable by boaters. In ten years up and down the canal I've never seen it shut, I think it was always padlocked open.

Perhaps the abutments failed because boaters kept hitting them with their boats...