This is Wispy 11 she has been moored here on the same spot since she arrived in the area late September/early October last year. Nice looking boat. Needs some TLC. 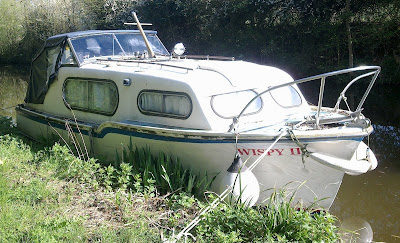 You will notice that the thirty day Explorer licence ended August 28. (Correction it endsAug 28 this year 2011, however it had spent its thirty days on the canal by the time it arrived here). Someone has been to visit it at east twice to start the engine and ensure the bilges were empty. It has been a bit of an annoyance to those of us that were caught in the ice. When the ice was thin both before and after the big freeze we risked sinking this boat when we were about those tasks that we all need to sort namely water and pumpout. When Dusty came barging his way through, to supply us all with diesel and coal, we were sure it would end up sitting on the bottom, but it survived. It still survives it has not moved. Whoever visits did hammer in the 2 foot of re-bar it was moored to that was dangerously sticking up out of the bank. Had someone tripped they could have been impaled on it. But never mind the owner has had 6/7 months free mooring.

Imagine my surprise, and dare I say joy, when I noticed last week that at long last it has had a patrol notice attached to it, the first I have seen on this boat. So it will soon leave us, lets hope BW can sell it and retrieve the mooring fee that is due. 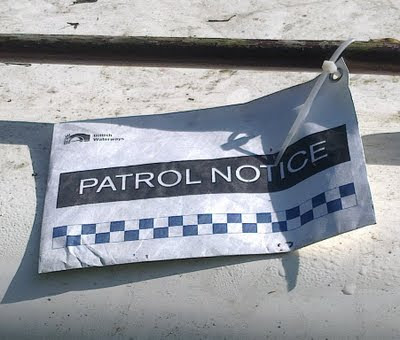 Am I mistaken or does the licence actually have a 2011 expiry date on it????

You gentlemen are correct thank you for spotting that. I hadn't noticed. I have made a correction to the text.

But it is still an over stayer. And its thirty days had expired about the time it arrived here. So it has over stayed on the mooring by six months and overstayed on its licence by six months. I suppose it will still come out.

HAS the boat been moored there for free?

I heard somewhere that these cruisers aren't as flimsy as everyone thinks. Perhaps the fact the ice didn't sink it is a sign of t.au, or how lucky it is? Someone must know....

Very true but a number of boats passed it during the freeze, it must have taken quite a pounding.

GRP boats dont just sink at the first sign of ice. They are actually quite strong and capable of taking a little more pounding than a piece of ice rubbing past the hull.

We used our GRP boat as soon as the ice was thin enough for her to break free. When we lifted her early this month there was not a sign of ice damage on the hull depsite us pushing her through some ice that steel boat owners insisted would sink her.

I am sure they dont, but it cant do any good to be constantly battered by 2" of ice from passing steel boats.

Why not? It really isnt an issue at all despite what steel boat owners like to believe. It was actually the GRP boat owners that were out of our marina first as the steely's didnt want to scratch their blacking!!