Braunston and the Milly M

It would seem that Braunston was a runaway sucess this year with around 120 historical boats taking part. I am led to believe this is a record.

I was thinking I might enter Milly M next year, she is after all a historical boat. Those of you that were around when she was built will know that she was built on line. By that I mean that there were webcams set up in the workshop so I could watch from my distant location in Riyadh Saudi Arabia. Gary Peacock at Legard Bridge Boats set up the webcams and a web page so I could watch the progress.
As it happens there were over 10,000 hits on the site. One other boat had been built at that time with webcams in the workshop but I think it was a private affair and not online as Milly M was.
Video Capture courtesy of Gary Peacock 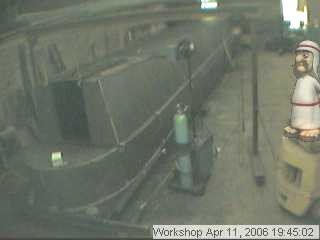 And I didn't realise it was your boat

WOW, Maffi as seen on the Waterways World website (http://www.waterwaysworld.com/latest.cgi)!!
Well I never... invading the domain of Granny Buttons!! LOL
You'll be after Andrew's job next ;)
Kevin