Incident at the lift bridge

This is Brasenose from College Cruisers. It is moored on what the TCCC call a winding hole. Behind it is another College Cruiser Boat. So two College Cruisers boats are breasted on a NO MOORING SIGN. There is a reason they are there. A total inability to read. These two boat came past me the other night, the first sounding the boat horn like they were at a football match, which I doubt they would have liked outside their house on a peaceful Friday evening, and you can bet I let them know. The second, Brasenose, struggling to drive the boat properly and engine smoking profusely. All appeared to be drinking, drivers included. 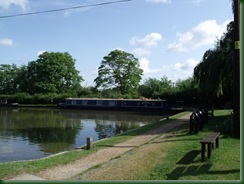 They spent the night here. 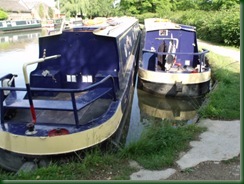 Brasenose had trouble stopping at the bridge and so caused this damage. I think it is unlikely they damaged the main structure of the bridge and this broken joint can be pushed together and screwed. They were lucky that no one was killed. Fortunately the two guys on the front deck ducked just before the collision that could have almost certainly crushed their heads. Their friends on the bank thought this whole fiasco was highly amusing. 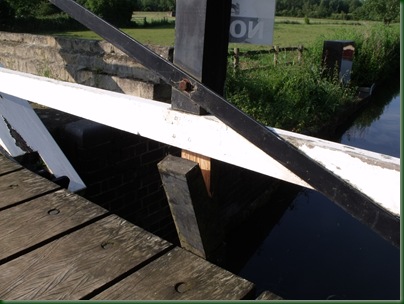 The crew of the boat asked two locals to give names for witness purposes. The locals refused. That said one of the locals did call the company and tell them what happened. A number of the crew were extremely rude to the two locals, one of whom was a woman.

Now the overriding reason this collision happened was because the gear cable broke and reverse could not be selected and you could say that was an end to it. However the crew had called the company earlier with a problem and were told to stop at the Jolly Boatman. They didn’t so one must assume they couldn’t read. Secondly, given that they were moving a dangerous boat they should have been going slower. Third had they not been under the influence of alcohol they may have been able to deal with this situation with out hitting the bridge. Easy to say, I know, but it is a possibility. 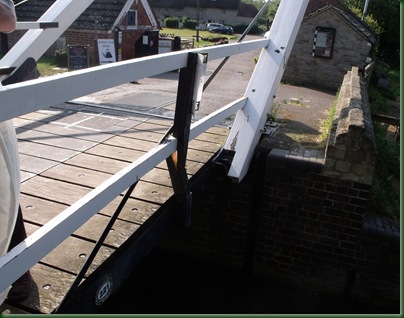 The inexperience of the crew, the inability to of the crew to follow instructions given over the phone by the company, the alcohol content of the crew, and the broken gear cable were all contributing factors. They all add up to what is, on the surface, a minor incident, but this is a reportable incident under H&S legislation. Someone could easily have been KILLED! I don’t think either the crew or the company realise this.

I hope you have sent a copy of this blog to the local BW office, these people should be charged with the full cost of the repair.

Yes I did but it is debateable that they should pay. The boat that did this is now not to far from the bottom of the canal.

I am not putting Anonymous comments on here. Name your self or go away.

Did you see them on the way back on Sunday?? They bumped past the wooden boat behind us then crashed into us....all seemingly were p****d as parrots.

I hope they didn't damage it. That chap built the boat himself in his garden.

Mmm is this not where you moored in April? although Nicholsons show the winding hole further down, waterscape boaters guide appears to show it just after the lift bridge so TCCC may be correct. The place where Nicholson shows the winding hole currently has a boat called Bones breasted up thus reducing the winding space anyway, suprised you have not commented on that or is it a mate who owns it?

I think I understand your comment GP and no Bones is not moored on the 'Nicholsons winding hole she is moored on an official breasted mooring, paid for!