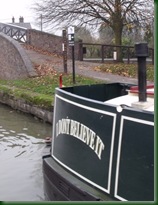 Today I arrived at Hawkesbury Junction.
This is nb I DONT BELIEVE IT. He is an over stayer. Why do I say that? Because the sign behind him says ‘For loading and unloading only. I had to moor behind him to get the rubbish bags off my roof. How do I know he was overstaying.

I watched him put his TV Ariel up. He had the audacity to offer to ‘move up a bit’ after I had unloaded my boat. What I haven’t pictured here is the three over stayers on the water point one of whom, ‘ORCA’, has apparently been here since I last came three weeks ago. He told me then that he moves around all the time. Yeah rite, probably restless in his sleep.

They were all there when we came through on Thursday. The last time we saw Orca and the boat in front of him was at the Village at War weekend, at the beginning of October, what's the betting they came straight to there after that. Hawkesbury is going to the dogs what with rubbish and over stayers.

Maffi,couldn't you have just thrown the bags of rubbish onto his boat and let him sort it out?
Ron