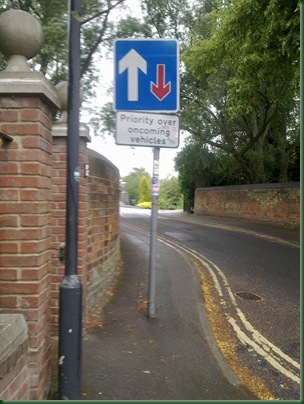 I had an email this week from the Traffic Department. Well I would because I wrote after the last email to ask them if they had understood my concerns about the sign post.

I believe the priority signs were installed over 10 years ago. Since then the responsibility for Highways has changed Authorities and there has been much staff turn over. Consequently, I am unable to trace any record as to why the sign was located exactly where it was. However, the presence of underground services can often influence the exact position of the post.

You may notice that the post is planted in a cut trench, so there is a man that can talk out of his arse.

As a result we felt that it would be prudent not to indicate any priority especially since visibility over the canal bridge has improved since the construction of William Lucy Way.

I hope this answers your query.

Typical Bureaucratic bull shit when they dont have a proper answer.

So pram pushers and the pram occupants are obliged to step out into the incoming traffic..... great.