Someone has some sense 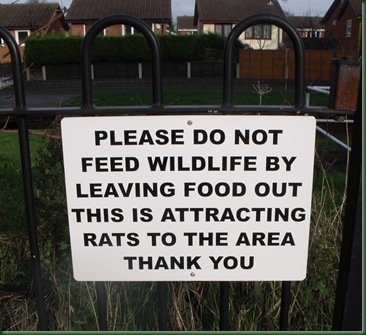 I am going to assume that the sign is on a towpath. So the sign is saying "I am trying to discourage rats from coming to my house which has been built smack in the middle of their natural habitat. What’s more I don't care that they were here long before me."

Human habitation provides the two important things for rats a food source and shelter. Rats are everywhere, they are not attracted into an area, they are already there. We even provide sewer pipes to aid their activities.

The animals which rats most resemble are humans. Some choose to live in filthy and unpleasant situations, think of the homes in the TV series such as "A life of grime" Rats just happen, like humans, to be very adaptable to almost any habitat. If the habitat is filthy or clean the rat is at home.

Rats have natural predators that keep the rat numbers down such as foxes or a neighbours cat or dog. Over feeding birds and other wildlife means that there is food left over for voles and field mice. Which in turn provide food for predatory birds such as owls and kestrels. Its called the food web, taking away the food to try and control one unwanted species such as the very adaptable rat has a knock on effect other species.

Wild birds are carriers of many diseases and bacteria too, yet we positively encourage them to share our gardens. So much habitat has been taken over by man that natural food reserves need to be topped up by us at difficult times of the year. Such as the onset of winter. If you are feeding birds in your back garden. Then you are putting back the natural food that would have been provided by the area under your patio and that of your lawn.

So here is what I don't understand and where I agree with Maffi.

Is it right then that in order to keep the natural animal population we should leave rotting food spread about on the tow path?

Is it right that morons can leave their bags of smelly, unsightly rubbish around just so we can keep the rat population fed to a standard to which they expect?

I DON'T THINK SO!

If the rats are as resourceful as you say they don't need our help feeding them, they manage quite well enough!

Steve, you have obviously read what I wrote and then surprisingly questioned what I did not write?

I did not say "Leave piles of rotting food spread around the towpath". That's what you read it to say.


I did not say people should be encouraged to "leave piles of litter and other rubbish to provide habitat for rats" either. That's what you read it to say.


You are correct, rats are quite resourceful and no one sets out to feed the rats. What would be wrong is to stop feeding birds with suitable food to replace what is unavailable to them by the loss of habitat. On the false idea that feeding birds will attract rats.


There is a simple and very obvious solution that most people are aware of. If you are feeding water foul of one kind or another. Put the food in the water. Rats are at home in the water, however the food tends to sink from sight in a short time and the fish are as good at scavenging leftovers as rats are.

The sign says leaving food out is attracting rats - it is factually wrong the rats are already there. It encourages people not to feed the birds on a falsehood.

Only partially right. The towpath runs along side the privet hedge. The canal is just under the top horizontal of the fence the sign is attached to. In the hoop on the left hand side you can see the balance beam of a lock gate. The sign is attached to the fence which isolates the car park from canal between two blocks of relatively new accommodation.

That the odd few rats might live in this area is not a problem. The feeding of birds rightly or wrongly is responsible for encouraging more rats to the area. People don’t like rats, simple.

The feeding of birds encourages the birds to become fat and lazy. Fat lazy birds get taken by rats. In the deep depths of winter I can see the point of feeding the birds but there is still a bounteous harvest to be had in the natural habitat.