Turning on to the Coventry Canal I watered up, emptied some rubbish and proceeded to Coventry. At the second bridge I stopped to pick up a near new pushchair that had been dumped. One of the tyres had come off. It was still attached. Wasteful!!!

Of course this turned out to be a big mistake because I ended up with a prop full of all the goodies this Canal has to offer.

Another half hour wasted! Yes I did put it in a bag and put it in the bin. There’s more. 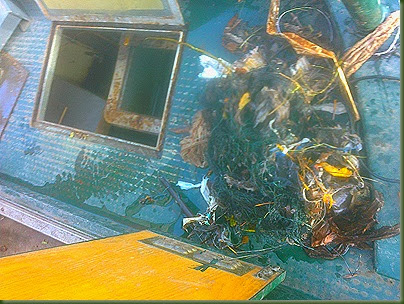 Two more bridges and I found a shopping trolley in the water. I pulled over to get it out. Talking to a local it transpired that it has stood by the water for two days before someone pushed it in. I asked where it had come from and was pointed to TESCO down the canal a bit. So I arrive at TESCO and whilst mooring I see another trolley in the water so I drag this one out too.

Getting a bit monotonous this.

I was amazed to see the same piece of laminated A4 paper sign on the ‘New Foot Bridge’. Now that CRT has an income off the basin in the rent from Valley Cruisers maybe they can afford a proper sign.

Sooooo
Is Grandad doing up the pushchair for latest Maffi Gene pool?

No its next to new.

We pulled the same amount of 'stuff' off our prop when we ventured along to the Coventry Basin.
We missed you on Friday night for the Birthday get together,