Well I left Coventry today after I spoke to a reporter in the Coventry Telegraph, about the garbage dumped at Longford Bridge.

I told him I was going to go and pick it up and he said he would have a photographer there to record the event. Well when I was nearly there I met up with the community boat nb Fazely which is a powered skip. They had been to Longford already and cleaned up.  In yesterdays picture you can see an envelope on that envelope was the address of a shop just along the road.

On arrival at Longford I stopped a) because the the photographer was coming and b) I had a prop full of plastic bags. Well I tied up to the hand rail that I mentioned yesterday and as I got back on the boat a young man with a black bin liner walked past me and went behind the bush by the bridge. He was there for about 45 seconds. When he appeared from behind the bush he was minus the black plastic bin liner. but carrying a smaller carrier bag. So I asked, “Why did you do that?” He, of course, did not answer and walked off. This is what he left. 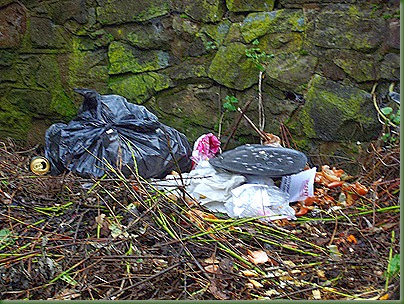 Now I know he left this because this was the view I had as I came through the bridge before I saw him with the bag. Centre right of the picture are some onion skins. He dumped his rubbish on top. 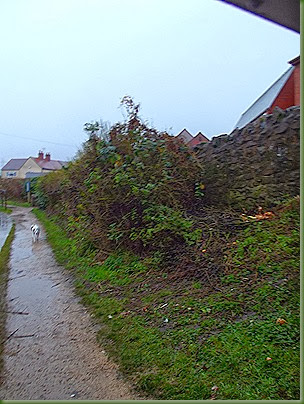 Well I was pissed at this, but before I asked him the question I did manage to take his photograph. I went to pick up his rubbish and in his rubbish bag was his address. This man is banged to rights. He has been reported to the council who say with a picture and an address they will prosecute. Score one brownie point!

Good for you Maffi ! The world needs more people like you :)

Tghere are lots of people doing the same we are just getting too pissed of and are fighting back.

Well done. Let's hope he gets a few hundred hours of community service clearing up other peoples crap. He might then realise what an anti social twat he has been.

Just want to say your article is as astonishing.
The clearness in your post is simply excellent and i could assume you're an
expert on this subject. Well with your permission allow me to grab your RSS feed to keep updated with forthcoming
post. Thanks a million and please continue the rewarding work.

Well done Maffi, I admire you.
All the best! Colin