Tuesday I came down the canal from Hawkesbury under the motorway along to the way to Longford where the canal widens and takes a sharp right hand bend under the bridge. The bridge is now famous, or is that infamous. It seems to be the place that has been deemed the local land fill centre. Tuesday I passed through there and removed two bags of rubbish form the towpath right by the bridge. There was a third bag full of rubbish closer to the wall that I decided I would pick up on my way back because I wanted to get to the basin at Coventry before it got dark.

Today at 12:00 Michael Knowles took this picture of the same spot. There must be about six bags of rubbish there now. The photographer is standing just about under the bridge on the tow path. Behind that wall are houses. The question to ask is WHY? 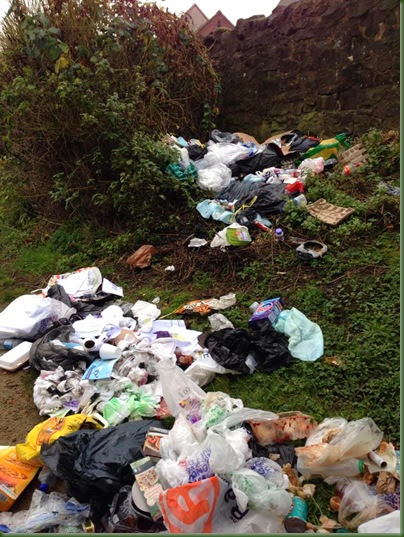 Well we know some scumbags seem not to understand that we have a system here and it works quite well. The trouble is that the rules about how much you can put in your bin and what you can put in your bin are draconian. The council make unnecessary demands on people and they in turn dump their excess rubbish on the towpath rather than upset  the fascists at the council.

I will be going that way tomorrow and will clear that mess up but in the process I will be looking for evidence of who did it. I shall report them to the council.

Now two weeks ago, if you look in the second picture, I removed a bag of rubbish from up the way there by that safety rail. By the look of the contents it had been there some considerable time. This area has a problem with fly tipping and Coventry Council need to deal with it  and  deal hard. 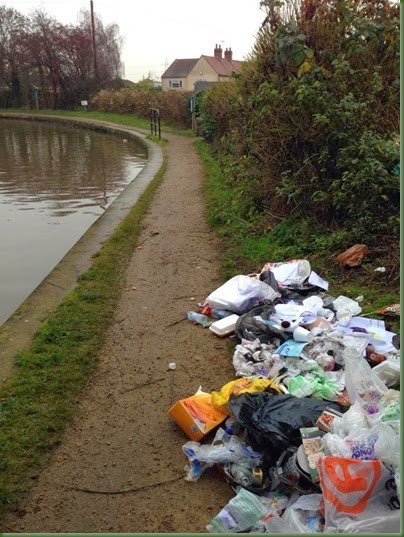 This is just beyond a joke.

Thanks Maffi, I have endured for three years this area and called it home. I am selling up and moving far away, it sickens me the low life, dirty, rotten, despicable, scumbags that can use the beautiful canal as their personal sewer. I HATE THEM
Yes hate is a strong word but I despise them too
Thanks for trying to clear up this shite ;-)