This is a group of Moslems who are at Downing Street to deliver a petition. That’s good, that’s what we do here. It beats the crap out of beatings and beheadings we are being bombarded with on the TV. The irony is they are exercising their right to free speech to protest against our right to free speech. The petition is asking for free speech to be halted because they don’t believe in it. This is crazy. Not only is this concept daft, it is as daft as they look. I would comment about the how daft the guy in red looks, but as this is about my not having free speech I shall hold my tongue. 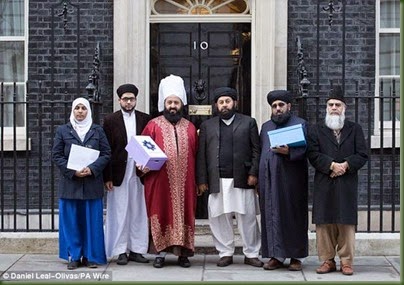 The petition contains 100,000 signatures. Given that women don’t have the right to speak for themselves one must assume they signed because their husbands/fathers told them to. So the petition only has a value < 50,000 signatures. Not to worry they have exercised their freedom (the same freedom I now exercise) and that’s what counts!

Any comments containing the word racism will not posted!

How funny, I wonder if they realized the futility of it.
Looks like the line up for an Opera doesn't it?
Ann

Maffi, I am trying to find out more about this story. I can't find anything on the BBC website. Where is further info available please? Cheers, Marilyn

If they don't believe in free speech I do think they shouldn't avail them selves of the right to spout this crap.

It amounts to the same thing John.

John you could reply directly to Marilyn.

The day people take any notice of me, shoot me!