A while ago I was called a ‘monumental arsehole’ which surprised me because I didn’t think I was that good. Yeah I know there are those who think like wise, like I give  shit. It surprised me a bit because the person who called me that was herself behaving like a monumental arse.
She had just arranged her 5 am move/swap on the London waterways (this is typical of London Boaters who are flouting the rules) and then had the nerve to berate me for not being positive. It would seem that my need to be more positive was because of a response I made to a request for somewhere to dispose of oil.
I pointed that there were posters about saying ‘KEEP OIL OF OUR CANALS’ and that there was a phone number to call should you need to dispose of oil. Now I thought that was a reasonable response to the OPs question, but obviously not! The bitch from hell let fly!
I pointed out that my response was helpful and that she should get her head out of her arse. 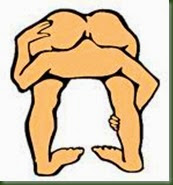 The lady then went on to tell me by PM that I was known by London Boaters as a monumental arsehole (this from people who tell me I don’t speak nice), well in all honesty I don’t really care. There are boaters in London who I have a lot of time for (who try to play the game by the rules) and there are boaters who I doubt I would piss on if they were on fire (because they make a point of breaking the rules). This ‘lady’ and her bridge hopping chums come in the latter group.
Why would they think that of me? Well My favourite response to “There are not enough visitor moorings in London” is a simple “There are more than enough visitor moorings in London, what CRT has to do is stop non visitors mooring on them”, but they don’t appreciate the truth.
Yeah it would be nice to be liked by every one, I like people to like me,  but for me that would constitute a lot of had work trying to understand characters like the bitch from hell and do you know what?life is too short. Feck ‘em!
From Maffi at 08:00

Someone surprised at Maffi saying it like he sees it.... she must be foreign !!
Rog
nb Paneke

Does this mean you can now put MA after your name? :-)