Sorry, but I just do not believe Teresa is up to the  job.

Well what can I say? Here I am currently enjoying the varied delights of Aylesbury basin. I am moored opposite Waitrose. Reeeeesult! 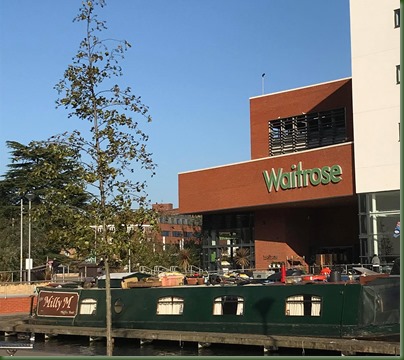 I have done a few jobs that were in need of doing, tightening up the tap in the kitchen, fixing a drawer also in the kitchen. I fitted a new socket in the bedroom for the TV, although its wired the other end of the wire isn’t, I am yet to work out how to get it to the socket I will spur it off. It also has 3 USBs in it for phone charging. 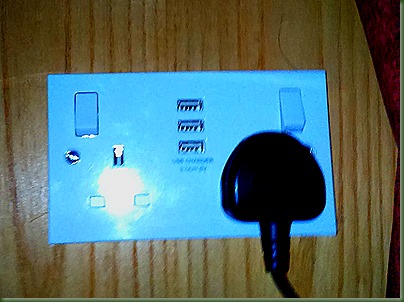 I used to live in this area some 25 years ago. I was a technical instructor at RAF Halton The Nº! School Of Technical Training, only a few miles from my current location. We went out for a drive around the old RAF camp which has now closed down, you know just for the memories. We stopped at my old house. Some 35 years ago I bought two Thunbergii conifers which at the time were grown in 1 1/2 inch pots and stood only 2 or 3 inches high. By the time I arrived at this house they were nearly 2 feet high. I planted them either side of the footpath. I knew from m last visit, before I got my boat that one had been removed because it was breaking the pavement. The survivor was now breaking the pavement and was in need of felling. 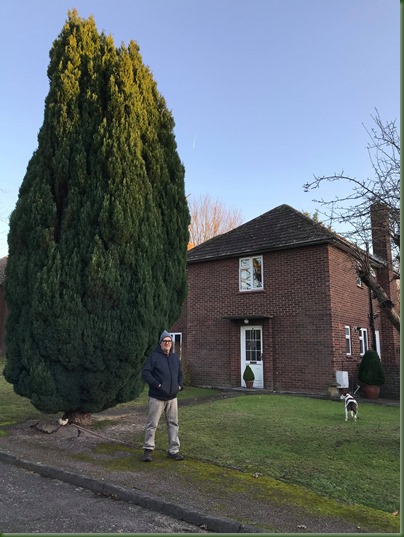 You can just make out between the front door and the gas box there is a short path. I laid that path in 1989, almost 30 year ago, using some slabs I found somewhere and some bricks out of an electric storage heater. Happy Days!

Where I say we I no longer specifically mean me and Molly. I am referring to me and Susan a lady friend of mine who travels with me on occasions. This was us in Susan's house in  France in August.

Susan’s history is as Madame Chavagnon the wife of the greatest chef ever in Oxford, André Chavagnon. Yes I know some of you will say ah but what about Raymond Blanc, but to you I can only say who do you think taught Raymond?

André, an award winning Master Chef, 3* Michelin, ran La Sorbonne just off the High Street, Rouge Blanc Bleu in Gloucester Square and My Cuisine in the Cowley Road. He served many celebs of the day including Ted Heath the PM, Macca, Jane Asher and many more recorded in the customers comments books Susan still has. André was also a champion Boule Player and held the world title for the UK for a while. Sadly no longer with us, André died August 2017 after a 10 year struggle with dementia. Both Susan and André loved boats but never got around to buying their own. I have known them both since about 2011. Unfortunately I never got to eating at one of André’s establishments as he was already ill when I met him, but little André follows in his fathers foot steps and he is goooooooood! 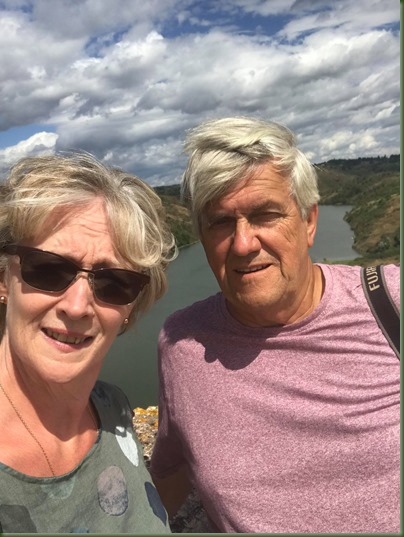 This was us in the Loire Valley

Susan and I got together earlier this year. We both have a love for good food and good wine so we kinda fit!

There was an interesting story in the Oxford times today. The University has purchased the city’s only all female social accommodation at Farndon Court on the Woodstock Road. The current occupants of the 97 room building were given two months to find somewhere else to live in October, which makes them homeless just before Christmas.

Now students need accommodation, I don't deny that, but the University doesn’t have to use bullshit to cover up what is a most appalling situation.

A spokesperson for Oxford university said, “We have decided to buy Farndon Court in order to provide accommodation for 100 post-graduate students, which in turn will ease the burden on Oxfords rental market”.

Me, I don’t see how making 100 people (young women) homeless just before Christmas is easing the burden on the rental market.

OU seems to be riding roughshod over the city, as they always have. They have the land and money to build their own accommodation, they have enough pull to get plans accepted and not effectively steal accommodation from Oxfords ‘indigenous’ population.