Have you ever heard of Serco-Mears?  No neither had I until just the other day when it was announced that they have just been awarded a government contract worth £2.9 billion pounds. Now it’s bad enough that the government is giving £2.9 billion to a company not many have heard of, but the purpose will stun you.

This contract is for the purpose of building homes for ‘asylum’ seekers! Outsiders! Now I don’t want to seem uncaring, disingenuous, or perish the thought RAAAAAAACIST, but when was the last time the government gave £2.9 billion to a house building project for social housing to house our homeless or ex-service or those trapped in sub-standard private accommodation? NEEEEEEEEVER!!!

OK on top of that If the company gets 10% profit that’s £290 million, let me put that better way,

And you can bet they get more than 10%

So today I moved from Atherstone down to Nuneaton. Whilst the signal, Internet/phone, in Atherstone was fair (and I by no means use that to say properly useable) the signal in Nuneaton is garbage! No phone very little internet.

Earlier today my phone tells me I am connected to the internet. Yet when I try to google pound/euro exchange rates I am told to make sure I have a signal!

Now I may be a bit old fashioned here, but if I pay for something I expect to get it. As in if I have a mobile phone I expect to take it to different places and use it. I most certainly do not expect it to tell me,

not even emergency services. I mean what if I fell and broke my leg or had a heart attack?

Yes I know coverage is not guaranteed, but I am in a town fer cris’ake not out in the country (where the signal is, for some strange reason, better).

How long have mobile phones been going now 25/30 years? Isn’t it about time the system was sorted to function properly. No, I know there is never going to be 100% coverage, but the system needs changing.

Lower Heyford generally only works with O2, but if you go up on the bridge over the platforms you might OK with several ISPs. Why is that?There should be one company responsible for supplying signal then all the phone companies could sell you phones and packages. You pay them, they pay the signal company.

No its not complicated! Electricity/Gas/Rail they all have a company that deals with pylons/pipes/rails and several ‘suppliers’ that deal with customers. I can’t believe it hasn’t been done before!

On being able to write

For some time now I have had problems with my laptop. Several of my keys failed to work S G H M didn’t work at all. Several others worked if you persisted. No capitals at all.

If you have ever had a problem with a lap top keyboard you may or may not know about the onscreen keyboard. It is not easy to write with the pointing device, but its OK in an emergency. A mouse would be better, certainly faster. 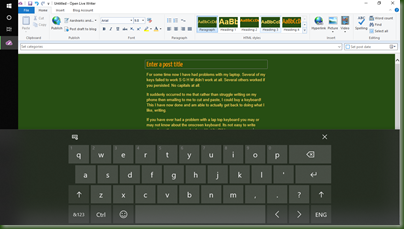 It suddenly occurred to me today that rather than struggle writing on my phone then emailing to me to cut and paste, I could buy a keyboard! This I have now done and am able to actually get back to doing what I like, writing.