I spent most of the summer painting my roof and other stuff, with an interlude in the house in France. However, as summer faded into autumn I needed to search out somewhere to hibernate or at least make my way to Brum, I haven't been for some years. With the latter getting further away with the stoppages due at various places. I was going to go with the 'lets stay around the Oxford area' scenario.

You may imagine my surprise when, out of the blue, I was offered a mooring at the famous Tooley's. I love Tooley's because it has such wonderful history. Here on the wharf I feel visited by the spirits of bygone boaters. Only yesterday I 'imagined' seeing a young girl standing near the end of my boat when I let Molly out for a pee! It was a fleeting glance that disappeared as I stepped down off the stern, changing my viewing angle. Trick of the light?

I am moored about 30 feet from the lift bridge. After being here just a few days I learned why the previous incumbent had moved on. It seems the operation of the bridge is quite a problem for some. Now I can understand single handers struggling to get the bridge open and they may have to nudge me in the process What I do find unacceptable is crewed boats 'whacking' me, quite unnecessarily. There are bollards opposite to tie up, let off the crew who can then cross the bridge to lift it to let the boat through, but No! Stupidity reigns! I wont complain.

And why is it that having just passed several moored boat there is a need to throw the engine into reverse at max chat to slow down so they don't hit the bridge. I might complain.

Susan has been to see the mooring. She says the terrace garden needs attention. Well that's not going to happen! 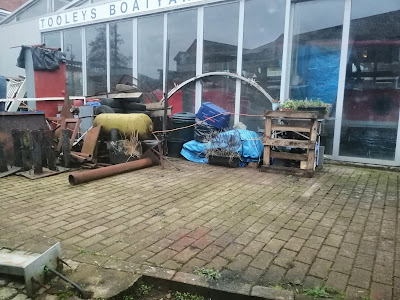 Well, well, well! How did you like them apples? This is now the fourth time we (as in country) have set out our stall for Brexit 2015 2016 2017 2019. We had over three years discussing the 'way out' and still couldn't come to a conclusion. Thousands of people took to the streets to protest the result, democracy at its worst!

I said at the time 'what ever way you voted we must all get behind this result and make this work'. Well that didn't happen!

But now we have another opportunity to do just that, What's the betting as soon as the weather warms up the protesters will be back out on the street.

Will Brexit work? I honestly don't know, but having seen the way the senior EU statesmen have behaved since the referendum and are still behaving even now I do not think we can stay in. We would be punished for having the temerity to say we wanted out. EU members have said on many occasions that they are going to fuck us up big time. Germany has never forgiven us for WW1 WW2, France cannot accept that we kicked their arse several times and saved their ass a couple of times too. I think it was Guy Verhofstadt who said the EU army will march on the UK!