As it was, so it will never be again!

Looking through some old pics and found these.

Milly M on the bank opposite the Co-op at Mirfield.
This was before I had ever set foot on board 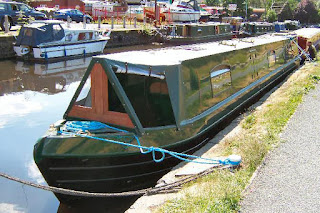 I don't know who the painter was, but understand he was allergic to paint. This might explain why he did such a crap job! Just out of view to the left hand side is taped an A4 picture of the font I wanted. This is OK but not what is in the supplied picture. 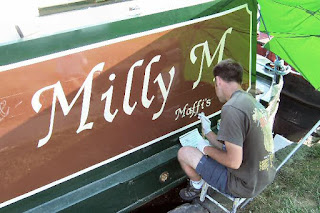 This is the picture I sent, that was stuck on the side of the boat. 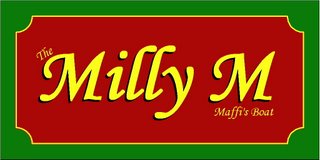 If they were unable to do what I asked, I really think they should have discussed it with me
From Maffi at 21:43 No comments:

Kilsby again. Towing to its mooring!

There I was chatting on (laptop) FB Messenger when it shuts me off and says it no longer supports the version of EDGE I am using and I will have to download the 'new ' version. No I don't want to now, but they say I must. Why cant they wait until I am asleep!

So it takes me 15 minutes to upload the new version, by which time I have logged onto Messenger on the phone.

So now I have the latest version of  EDGE. EDGE is an Oxymoron because it doesn't have it (the edge)! Ok so lets start FB again so I can continue with my conversation. NO!

Now you might think this is quite a clever computer, but you would be wrong. It doesn't know simple tings, things like which window I am going to throw it out of if it doesn't start behaving itself.

I bought my first computer 30 years ago and haven't been without one since. And in all that time they (all companies) have failed to get it fucking right. 30 Years down the line its about time they fucking did! Its like they have only just started and I am pissed off!
From Maffi at 23:58 1 comment:

For as many years as I can remember Kilsby has been moored on the Hythe Bridge Arm in Oxford. You may remember a pinky red paneled boat with yellow framing opposite the small, but adequate facilities block. It has, for the last several years, looked very sorry for itself, there being a constant battle to keep the water on the outside. Recently the owner relinquished her grasp and bought a new boat and Kilsby was donated to a charity. 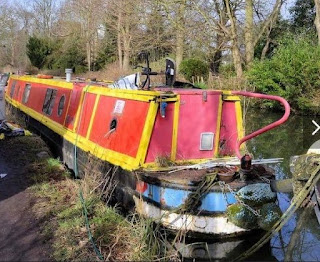 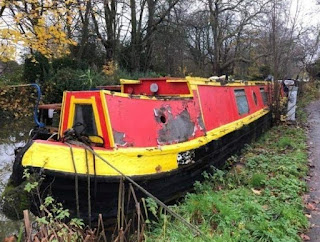 Kilsby, if she was able to be saved, is to gain a new life as a hire/trip boat and had to be towed to Tooley's Historic Boat Yard where it was to be appraised and the first stage of its reformation was to be performed.


It travelled over several days as volunteers were available. The boat was so badly listing that Tooley's placed several old batteries on the roof to level it up. During its stay in Thrupp the batteries were nicked and had to be replaced before it could continue its journey. One day it appeared behind me on the Tooley's Wharf. 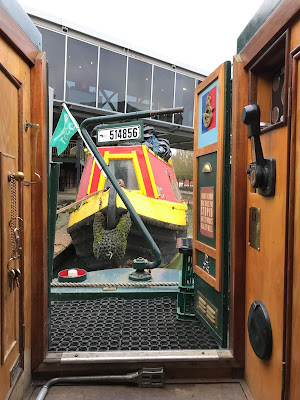 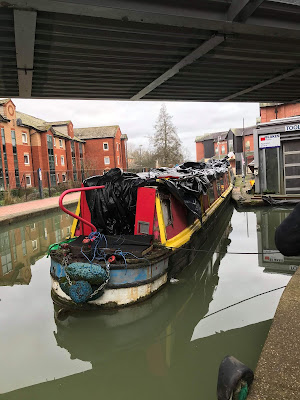 Tuesday 28/01 it was unceremoniously dragged into the dry dock where it started being stripped of its 'soft' bits, of which there were many. There was not a piece of wood on the boat that was not damp to one degree or another. This was a shame because there was a lot of Mahogany on it.


On Day One the inside was stripped out. It was not pleasant. There was more wild life hiding behind the slimy wood walls than was healthy, some of the biggest slugs, snails, and worms I have ever seen. The half filled skip at the yard was soon filled and then the yard itself.

6 0'clock ish next morning the skip was taken away and a nice empty one put in its place. It didn't take long for the volunteers to fill this one all stacked very neatly. The cross board water tank came out followed by the poo tank and a strange oblong box construction in the top of which was gas bottle storage and below a coal bunker.


On Thursday there was another change of skip and the loading continued filling this one to its maximum capacity. This saw the majority of the wood out of the boat and any 'surplus' stacked up on the wharf again. The BMC 1.8 also came out. 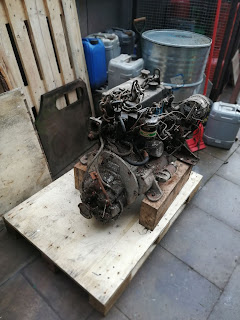 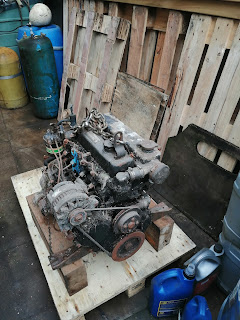 Yet another skip arrived and was subsequently filled on Friday and still the junk came out, including a ton or more of house bricks.

Saturday morning came, and buckets and buckets full of detritus that had been residing on the bottom of the boat under the floor were added to the pile already on the wharf which included a fridge and a cooker …… oh and a bath!


Once again when Monday came the skip was replaced with an empty and that afternoon I filled that skip to nearly full with what was on the wharf, only the bath remains.

Kilsby was taken out of the dock first thing and moored up near where the old bridge had been. 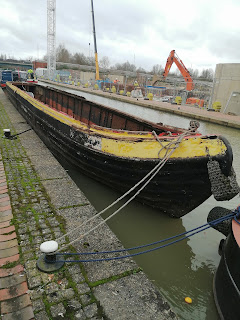 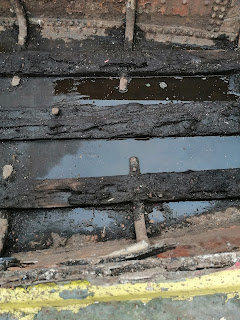 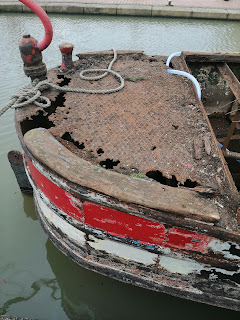 Kilsby is an interesting boat because its cast iron hull sides and wooden tri-keelson bottom are 107 years old. In its heyday it had been a working boat and for many years after that a house boat having at least three owners during its 25 years on the Hythe Bridge Arm!

I had the privilege of towing the now stripped hull up the canal to the old arm where it will rest until April when it will be inspected and assessed for refurb. I will post the vid next week.
From Maffi at 23:40 4 comments: