There cant be many who missed the events in America last May. It changed us for ever. It made us less. The story that was put out by the press was a pack of falsehoods. Lets start with the infamous picture of Officer Chauvin with a knee on Floyds neck. Why is this picture so tightly cropped? It is to highlight the knee on the neck, but it doesn't do that. What it shows is that Chauvin's knee is not on Floyds windpipe. Floyds spine and neck muscles would prevent him from asphyxiating, No this picture is cropped so you do not see what is happening around Chauvin.

The reality is that four officers were involved in this arrest. Chauvin didn't have to kneel on Floyds neck with any force as there were officers on his legs and back stopping him from moving. Yeah ya dont believe me. So lets look at this picture from a different point of view! 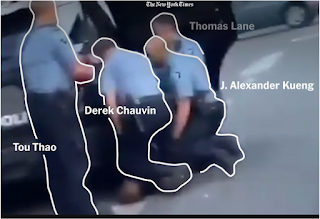 Totally different isnt it? The previous picture was cropped to hide the other officers in the arrest. Chauvin didn't have to apply excessive pressure because officers Thomas Lane and Alexander Kueng had the upper hand. Chauvin was holding Floyds head down to stop it flailing about!
A few facts most people ignore. George Floyd was not murdered. GF was passing dud money. Not just the $20 bill from the shop but when officers arrived GF was stuffing forged money down the side of his seat to hide it from the police. GF was dying before the cops arrived on the scene. GF lied about taking drugs to the officer. Had he told the truth the officer may well have called an ambulance straight away.
BEFORE GF was put on the ground, at his own request I might add, he said “I cannot breathe”, 7 times. The officer, Derek Chauvin, did not, repeat louder DID NOT do anything illegal. The neck restraint method was at that time part of his training and still in the training manual on that day. GFs body contained 3x the lethal dose of Fentanyl plus other drugs, he was dying. He would have died by nightfall had the feds not arrived. The Press told lies about what happened and who he was as a person, loving father and all that crap. Then the world exploded! All of the riots across America and indeed across the world were the fault of the Press fanning the flames. GF was a violent criminal drug dealer, he held a gun to a pregnant woman’s baby bulge, he had a long rap sheet and the world went into meltdown over a piece of shit.. The world honored this worthless piece of crap and we are all less because of that.
From Maffi at 01:19 8 comments:

Here I am moored just below Lock 15 at Marston Doles above Napton on the Oxford Canal. On Tuesday I took a walk down to the bottom lock to get rid of my domestic rubbish. I didn't realise it was a tad over 2 miles one way which meant I then had a 2 mile hike up hill to get back to the 'Milly M'. Going wasn't too bad its down hill, but coming back was a bit of an effort!

On Wednesday @1800 I started to feel a bit odd. My pulse started to race. I dont mean just speed up a bit I mean raaaaaaace! I got out my BP monitor and checked my BP Systolic 169 Diastolic 97 Pulse170 bpm.

Mmmm, thought I that's not right so I checked it again, it was similar so @1806 I sent this picture to my good friend Dr Bones with the message 'what do you think'. She came back with, "Seek medical help and call Dr Kate.......unless it's the dog."

Well I called 111 @1809 I was lucky there is almost no signal here but they picked up and entered in to a diatribe of recorded messages and button pressing. After the sixth button press I thought I don't have time for this so I hung up and called 999 @1815 and explained the situation and the said they would get a Clinical Tech to call me which they did @1855.  I again explained the situation and after a discussion of the fine details they said they would send an Ambulance.

Well it was over two hours after my first concern before they arrived. I didn't worry I was in an awkward place and I knew not to worry and get stressed lest I should exacerbate the situation.

The Paramedics arrived about @2020 with more gear than I could carry, on a good day, and proceed to stock my boat with bags of tech/med kit. There is a pinch point in the kitchen that is 9". One of the girls was a bit embarrassed that she couldn't get through with out a struggle. I assured her that I had a friend who made her look like Twiggy that managed it with a struggle.

The girls set about their business checking and recording everything. In this situation it is a bit embarrassing for me because after 2 hours it had mostly calmed down. The 'best' they got was 146/88 66 bpm, which given I normally read high on the systolic measure was not a real cause for concern.

We discussed the situation and decided that they would take me to hospital if I wished or I could call my GP in the morning. Given my view of the whole picture I decided to go with the latter option as I couldn't leave my Molly dog on the boat all night.

They were amazed at my calmness given my initial worries, as I was, but over the last 9 years I have been counseling a bereaved chap of my acquaintance and I have seen what stressing over stuff has done to him, and still does, so I am a bit more prepared to stay chilled than most.

Epilogue: On Thursday morning I tried contacting my GP to no avail. On Friday I did manage to contact the surgery and booked a call back from the GP. However the signal being bad after several attempts we gave up. Why am I telling you this? Well there is a very obvious problem for people who are not in the 'phone zone' getting help if needed. Why is this so in 2021?

But more especially there were large areas of the country that didn't have a basic GPS phone signal and this was a bit of a slap in the face to the people in those areas. I am sure we have all, at some time, been frustrated when we can't get a phone signal when we are out and about. Often in the area we are in there is a perfectly good signal, but not from the company with which we we are connected.

Now the electric and rail companies have a good system. One company is responsible for the infrastructure the over/under ground works, the supply if you like, and many other companies are responsible for "providing the service". Why cant that happen with the phone service. One company responsibly for the transmitter/receiver masts and all the others for "providing the service". Makes sense to me! What do you think?

That virus and the vaccine!

1. I am concerned about mixing antibodies I may already have from my first infection with the vaccine?

2. I am concerned about mixing antibodies I may already have from a second infection with the vaccine?

4. If the second virus was not the same strain as the first will any vaccine be effective?

5. Why can I not be treated with Hydroxychloroquine? Following the political ousting of Trump, some doctors have started suggesting "It will work".

6. And finally what is the effectiveness of my own immune system?

These are all questions I have tried asking. I cannot get my own surgery to even pick up the phone, 119 a very extended diatribe from a recording  telling people that they will not answer these types of questions. The Internet is great at telling you how to prevent catching it.

I am not an anti-Vaxxer but I think it is only fair, given an A&E told me I had the virus back in February and a cancer specialist told me only a few weeks ago what I thought was flu over Christmas, was on the balances of probabilities Covid-19, that I should ask these questions.

Away for a little trip!

One is prepping for a trippette. I shall be setting off at the weekend heading to Gayton. I shall be travelling with my dear friend Mortimer Bones who is also on a trippette. She can only do weekends so I am baby sitting her boat during the week.

Whilst at Gayton, if I can get in touch with a champion boat fitter of my acquaintance, I intend to a have kitchen refitted. I have had the boat for fifteen years now and the kitchen is getting a bit tired.

You may remember a few years ago I had the bathroom done, by the same chap as it happens! He did a splendid job of that so it would be folly not to use him again.