Did the fat lady sing!

And so Derek Chauvin was convicted as I had predicted. We can say he was guilty because a jury of his peers listened to all the arguments and determined on the evidence presented that he was guilty. No 'might be guilty', 'think he is guilty', or 'on the balance or probability' Just straight forward guilty.
Then out comes the story that one of the jurors a Brandon Mitchell said, after the trial, that he had been stopped a couple of dozen times by the police for no real reason. Now I may be a thicko, but how can that trial have been fair when at least one of the jurors was biased against the police!
He, the juror, also LIED about attending a BLM protest.  Chauvin's hope of appeal was boosted after picture emerges of Mitchell at BLM rally wearing 'Get Your Knee Off Our Necks' T-shirt despite telling court he'd never been on a march.
Brandon Mitchell was one of 12 jurors who convicted Minneapolis cop Derek Chauvin of  the second-degree murder of George Floyd last month. Mitchell, a 31-year-old black man, was photographed on social media attending an August 28 protest in Washington, DC at which Floyd's relatives spoke. Mitchell is seen in the photograph wearing a t-shirt with a picture of Martin Luther King Jr and the words 'GET YOUR KNEE OFF OUR NECKS' and 'BLM'. He is also wearing a baseball cap embossed with 'Black Lives Matter'. 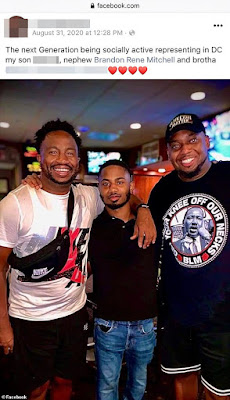 Mitchell acknowledged being at the event and that his uncle posted the photo, but claims he doesn't recall wearing or owning the shirt or cap. Mitchell said he answered 'no' to two questions about demonstrations on the questionnaire sent out before jury selection. Legal experts say the revelation will likely be brought up on appeal by Chauvin's attorney, Eric Nelson, who will argue his client was denied impartial jury.
We have at least one man who perjures himself and suffers severe memory loss. And he was supposed to be one of Chauvin's peers? How many more of the jury will come forward with similar stories!
So it ain't over yet!
From Maffi at 21:10

No its a mis-trial. One of the jurors lied in court papers. Had he told the truth he would not have been selected. He was not unbiased. How many more will now come forward?

11-1 is a majority in an unbiased jury of peers.

It would seem that Chauvin's is concentrating his appeal on "....The lawyer, Eric Nelson, said that his client, Derek Chauvin, did not receive a fair trial for several reasons, including the judge’s decisions to not sequester the jury during the trial, to not change the location of the proceedings and to not grant a new trial because of publicity that included the intimidation of the defense’s expert witnesses...." he doesn't seem over bothered about the juror. Given the predisposition of US Police to stop black men what chance is there of finding a black man who hasn't been stopped by them?

Mary Johnson Can you not read? No anonymous comments, your profile is empty.