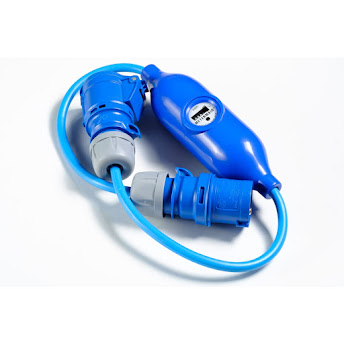 It's an 'IP44' plug and socket each with a half metre of Arctic cable which is connected to an inline electric meter. The purpose of this device is to record your electricity consumption when connected to a power power post. You do this in order to be able to pay your electric bill when due.

So the way it works is one end is plugged into the supply and the other is connected to your shoreline cable. The one in the picture is £164. The £400 one replaced one of the short cables with 20 foot of artic cable hence the extra £200+😮😮😮

I'm sorry but this is a rip of, daylight robbery! There is an easier/cheaper way of achieving meter reading. Buy a meter, buy an enclosure, a length of cable and install! That's what I did. Total cost £35. 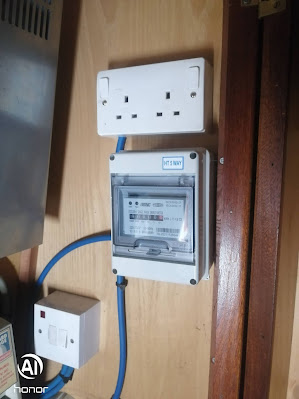 The only problem is that the mooring owner can't just come along and read the meter when he wants to unless you are around, but you can easily avoid that by emailing him a snapshot of the meter. Sorted. Job done!
From Maffi at 19:56 No comments:

Does anyone know the whereabouts of John Sloane of the nb Gemma Joy. I haven't heard from him for many years?

I spent the last two years moored at Tooley's Wharf right along side the dry dock. It was never my intention to stay so long but circumstances dictated different. I was originally contacted by Matt who asked if I wanted a winter mooring. Well the price was good so I said yes. With in the first few week of my residency I saw the ghost of a child at the end of the wharf. From this I took this to mean that I had been accepted by the history that is Tooley's! A fine history it is. Originally I was only supposed to stay until the end of March. 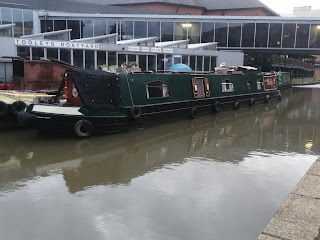 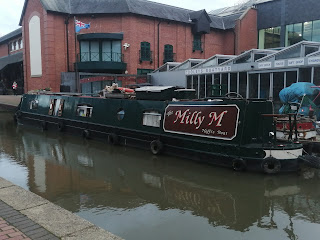 However Covid-19 reared its ugly head March 2020 23rd to be exact and the world changed! Tooley's were quite happy for me to stay insitu until the crisis was over. So I stayed for nearly two years.. I had my living space at Tooley's and Susan had her space in Oxford. We were due to go to France on March 14. We decided against that and held on to the tickets for later use. Instead I decided that we would decamp to Oxford. There we would have a bigger space to live in and local parks would provide space for Molly.

Well after the first six weeks I was crawling up the wall. In the middle of a city we saw virtually no one. Infrequent visits from family were conducted via the living room window on the first floor and and gifts or deliveries were raised into the house via a basket lift.

We sat back and decided that we should go back to Tooley's. This was an infinitely better plan than the first 6 weeks. We were able to pay a lot of attention to the outside of the Milly M and she ended up looking top dollar. We did travel back to Oxford from time to time to do the shopping for an old lady of Sue's acquaintance who lived a few miles away and couldn't get out herself. I never went in the building and Sue only left the shopping in the hall.

So all that came to an end as we returned from our tripette this year. The previous incumbents of the wharf had had some issues with their landlord and wanted to come back, so given I was only suppose to be there for winter 2019 I was out!  However I had returned with a few problem with the boat so was allowed to stay until Nov 1 to sort them out. In the mean time efforts were being made by Matt at Tooley's to secure me another mooring at Sovereign Wharf. It took a while but I am now moored at Sovereign Wharf.

It is only temporary in that it is the mooring that Ian lets out during the summer, but I am hoping to come to a deal either for regular winter moorings or, if I am lucky, a permanent position here. You might wonder why I would want to stay in one place all the time! All I can say is the knees are wearing out, the hips are fucked and I am 71 in a month, so all in all I need the rest!